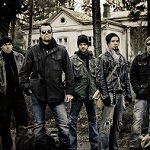 Finnish Metallers Adamantra, with a twist of progressive and power metal elements, have been preparing their second album in a calm manner. Adamantra released a new album named Act II: Silent Narratives in 2014 following the 2009 debut ”Revival”. Silent Narratives received positive rewievs and Adamantras original vocalist Tuomas Nieminen was back in the line-up, so everything is possible for Adamantra from now on.