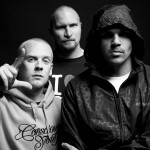 CONSCIOUS YOUTHS is something else.

The new album “Don’t Worry” was released in May 2008. The album gained a lot of media interest and great, fully packed gigs!

A recent web posting hailed them this way “Paleface, Redrama, Mr.Singh (and Promoe) have joined forces! The result is like an urban version of Crosby, Stills, Nash (and Young)! The microphone switches hands smoothly as the speakers emanate four individual vocal styles on top of bass-heavy rhythm tracks. Each MC comes through rock solid and versatile, making the C.Y. cipher complete.

CAPENAPE is the frontman of Helsinki-based reggae-outfit CapeNape and the Foundation. Well-known for his strong vocals and tireless stage presence, “Captain Nape” adds smooth harmonies and spiritual vibes to the mixture.

REDRAMA is one of the most celebrated Finnish MC’s rhyming in English. Besides touring around Europe supporting the legendary Gangstarr, Lil’ Red has released two critically acclaimed solo albums. Red has also received the European Border Breaker Award in 2004. Red’s melodic rhyme style is truly off the radar!, Red also did the FIFA Anthem for 2008 champions league with Shaggy..

PALEFACE has been around Finnish hip-hop since it’s very beginning and to some his name is synonymous with the genre itself. Besides releasing music, he’s been involved with translating books and poetry into English. Pale has also established himself as one of the more recognized personalities in Finnish radio. Three solo albums on – he’s set to make another bench mark with the Conscious Youths Crew.