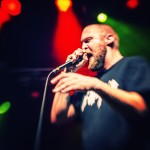 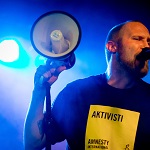 Paleface (Karri Miettinen) is definitely one of the most respected and international rap artists in Finland. The debut album “The Pale Ontologist” (2001) was a huge success both in Finland and abroad. Hit singles like “Back to Square One” have been one of his most well-known songs. The second album “Quarter Past” was released in 2003 and by the time it was clear to all that a hip-hop star was born.

In 2009 Paleface signed a new record deal with XO Records and the fourth album “Helsinki– Shangri-La” was released completely in Finnish. The single “Talonomistaja” got a lot of attention in media and it has been played in YouTube over million times. The album was awarded with Etno-Emma in 2010 and Paleface himself was awarded as the male soloist of the year in Emma Gala 2011. “Helsinki– Shangri-La” has sold platinum and the fifth album “Maan Tapa” sold gold within a week in 2012.

Paleface has started cooperation with American rap artist Matre and they released a new album “Food For The Gods” in the beginning of 2013. Paleface & Matre toured together around Finland, Estonia and Stockholm in early spring and more gigs are scheduled for late summer 2013.

Paleface & Matre – Food For The Gods: