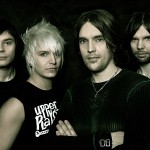 
Sometime after he parted ways with the other members of Sunrise Avenue in 2007, guitarist Janne Kärkkäinen decided to take a break to digest all that had transpired. He wanted to make sure he knew what he wanted to do in the future, whether it was to continue with music or work in some totally other field altogether. It was not very long, however, before he found himself yearning for a new start doing what he loved to most, music. Pretty much all of his earlier industry contacts had been more or less obliterated and he was in a place where he needed to figure out something completely new. Janne had a lot of ideas for songs, but since he had given up songwriting years ago, at the start of SA, he felt he needed a little nudge to help him along the way. So along with that process, arose the idea of calling up the guys from Poets Of The Fall, a rock group Janne had toured with in his SA days. Janne had always looked up to the guys, and their music, so it was a great sign of the things to come when he got an enthusiastic response to his ideas.

For starters they decided to try out if their chemistry would work musicwise. At that stage they had no big goals or plans. From the very first note it was clear there was a connection worth exploring. During the spring of 2008 the guys held songwriting sessions and as a result of every session there was a new song. Janne recorded demos of the songs, and come May he and the guys sat down to go through the material created. The feeling was mutual and clear; these songs should be on an album.

The debut album “Cyanide Skies” was recorded during the fall of 2008 and is due to be released in February 2009. The album contains ten tracks of rock, in various styles and moods, but still sounding like a whole. In addition to Janne, you can hear the playing of Pyry Nikkilä(guitar), Jari Salminen(drums) and Jani Snellman(bass) on the album. The guys from Poets Of The Fall, Marko Saaresto and Olli Tukiainen, will also be featured on a couple of tracks. The album is produced by Markus “Captain” Kaarlonen and Janne Kärkkäinen and it will be released under POTF’s Insomniac label in Finland.

Although Phoenix Effect started as a solo project, much has happened since the first song. Extremely talented young guitarist, Pyry Nikkilä, has been a part of Phoenix Effect almost from the start. The latest additions to the line up are Lauri Hämäläinen(bass) and Anton Laurila(drums).