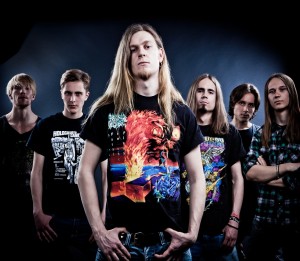 It was back in 2005 when Tuomas Yli-Jaskari came up with an idea that would be named as Moravia and later on Tracedawn. Tracedawns’ self-titled debut was released in Finland in March 2008 and Central Europe followed in August the same year. The release resulted great reviews and features in media all around Europe storming about the technical capabilities and songwriting skills of this young band. The guys soon found themselves rocking the stages of the biggest venues and summer festivals around Europe including Wacken Open Air and Summer Breeze in Germany and Tuska Open Air in Finland.

“Tracedawn’s debut impresses with outstanding technical skills, a feel for great melodies and a playful ravenous appetite which you can practically feel.” -METAL HAMMER

“What these youngsters from Finland have delivered on their current debut album could hardly be fresher, more hungry and more dynamic.” -SONIC SEDUCER

With their second album Ego Anthem (2009) Tracedawn redeemed the high expectations their well received debut set upon them and took it even further. Ego Anthem was supported with tours around the European stages together with Finnish metal elite such Ensiferum and Stratovarius.

The new album “Lizard Dusk” introduces a renewed Tracedawn as the intensive touring, rehearsing and recording lead into a situation where the bands lead singer Antti Lappalainen was forced to leave the band due to personal reasons. The search for a new singer wasn’t easy but the band managed to find just the right guy for the job.

With Lizard Dusk Tracedawn shifts in yet bigger gear, being more aggressive, faster and more melodic than before. The new album presents a self-assured band that can combine strong melodies and furious riffs into progressive, dynamic and contagious modern metal music.

The album was produced by the bands mastermind Tuomas Yli-Jaskari and recorded by band members Tuomas, Perttu and Vili at Seawolf and Redhouse Studios. Lizard Dusk was mixed by Henrik Udd (Dimmu Borgir, Dark Tranquility, Arch Enemy etc.) at the infamous Studio Fredman in Sweden. The finishing touch was once again performed by mastering guru Mika Jussila at Finnvox Studios in Finland.

Listen to “In Your Name”: