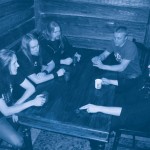 Malpractice was formed in 1994 in Kouvola, Finland. Though started out as a thrash-metal band they cast aside their thrash influences after the release of their first self-financed MCD Memorial (1996), and embraced more melodic and progressive elements. Later the same year Malpractice released another MCD, Frozen.

Still without a recording deal, Malpractice recorded an album´s worth of material in March 1998 at Music Bros studio in Imatra, Finland with engineer Miitri Aaltonen and Malpractice´s first full length album Of Shape And Balance was out in September, released by Mastervox Records.

It took a good six years, a couple of low-key demos and a lot of hardships before Malpractice activated again in 2004 to record yet another demo titled Circles And Lines, which caught the attention of Spinefarm Records. Malpractice signed a deal with them in December 2004 and the recordings of Malpractice´s 2nd full-length album Deviation From The Flow took place in April at Astia Studio A with producer Anssi Kippo (Children of Bodom, Teräsbetoni etc.). With its superior musicianship, grand choruses and solid songwriting Deviation from the Flow is a worthy successor to the legacy of Dream Theater, Fates Warning and other progressive metal dinosaurs and now 2008 sees the release of Malpractice´s 2nd effort for Spinefarm.

While still progressive and melodic, Triangular also sees the return of some of the thrashier elements in Malpractice and combined with the virtuoso skills of the new vocalist Aleksi Parviainen Triangular takes Malpractice to a whole new level of excellence, making the listener think about Queensrÿche meeting Megadeth meeting Dream Theater. Much like their heroes, Malpractice certainly know their way around different moods and atmospheres, ranging from Waves fragile tranquility to Triangular´s instrumental extravaganza and Symmetry´s almost poppy choruses.

Showing Malpractice more versatile than ever, Triangular is a sure-fire delight, and not exclusively for the lovers of progressive metal and rock.