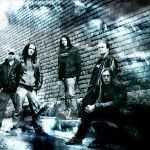 Kill the Romance was founded in Finland in the beginning of the 2004. The band performs diverse modern metal and delivers aggressive songs blended with catchy melodic parts. In July 2004, the band recorded their first self-entitled EP which got some great reviews from all over the world. Self-entitled EP was good enough to convince the Finnish metal “agents” and Kill The Romance was chosen from over 150 unsigned bands to play in the first Finnish Metal Expo happening.

In June 2005 Kill the Romance released their second 4-track EP called “Logical Killing Project”. Once again, the press liked it and “Logical Killing Project” gained a good amount of “demo of the month” nominations in different magazines and webzines. After the release the band toured heavily in Finland and played eg. in Tuska Open Air metal festival and Nummirock metal festival. In 2006 Kill the Romance released their third EP called “Cyanide”. “Cyanide” was chosen to “demo of the month” in biggest Finnish music magazine Soundi. In same time Kill The Romance was also chosen from hundreds of demo bands to play in Wacken Open Air Metal Festival’s bands battle final in Finland.

In fall 2006 Locomotive Records inked a deal with Kill the Romance. Debut album “Take Another Life” was released in Europe and USA in March 2007. After the release Kill the Romance toured in Finland, Germany and Switzerland.

In March 2010 Kill the Romance started to record their second album. The album called “For Rome And The Throne” which is definitely the most diverse in group’s history was released in March 23th 2011 in Finland via Inverse Records. Album landed on Finnish chart and a lot of gained praised reviews. “For Rome and the throne” will be released in Europe in the beginning of June.